If you're a regular reader of my blog, you know very well that my family, the Gombash's, are of Hungarian descent. Through-out my research I find new documents and records that shed light on the diversity of my Hungarian heritage. Through our Hungarian ancestry we're also Slavic, Swedish and Transylvanian. Now with some new research on our noble origins, I'm discovering that we're very distantly Spanish.

Through Eszter Tóth, we descend from the old and now extinct Nagy-Martoni family. The Nagy-Martoni began in Hungary with three brothers Bertram, Simon, Michael and their sister Tota. In 1198, the four siblings left their home of Aragón in Spain to accompany Constance, who was bethrothed to King Imre of Hungary. Much was recorded about the Nagy-Martoni family as several members of the family became quite powerful and well-to-do.

Modern location of Aragón in Spain

I was able to find an English source that wrote about the family: [At the court there were people who understood Provençal, because Constance had brought some families from Iberia with her. The most famous were the three brothers, Bertram, Simon and Michael, who freed Mallorca and Minorca from the Saracens, and had to leave Southern Spain because of the Almohadian invasions. They fought against the heathen in Hungary too. In 1241 "Simon Hispanus" and Bertram played a decisive role in the successful defence of the Hungarian capital city of Esztergom against the Tartars. In 1204 the Hungarian King gave a village to the sister of the three knights, a "beautiful" Tota and the Spanish family received its Hungarian name from that village. Later they were known as the counts Nagy-Martoni/or the Fraknói or the Bajóti family.] (1). 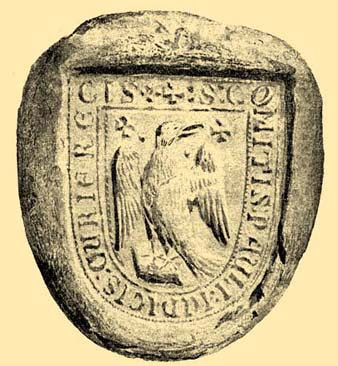 There was another additional English source that described in more detail the sister Tota: [Constance brought with her a girl called Tota, the sister of Count Simon and Count Bertram. She was exceedingly beautiful, so fair, indeed, that scarcely any woman in the world in those days was considered her like. This girl was given in marriage to Duke Benedict, son of Conrad, and her dowry was the town of Martinsdorf, a gift from King Emeric and Queen Constance.] (2).

Interestingly enough, I descend from King Imre's sister Margit through my mother's family.