Ever since my father had his stroke last February (2013), I've been increasingly curious about my family's medical history and causes of death. Digging into my paternal grandmother's family revealed some scary and shocking information. My own grandmother, Mary Lou (Adas) Gombash, died from a massive heart attack and from what I understand, her brother had some heart and possibly stroke issues. They are the children of Edward Robert Adas, Sr. I've created a family tree to highlight the causes of death in the Adas family, going back to our immigrant ancestors who came over from Putzig (today Puck, Poland). The text in red is the cause of death on their death certificate. You'll notice that every single one of them died from heart related issues. 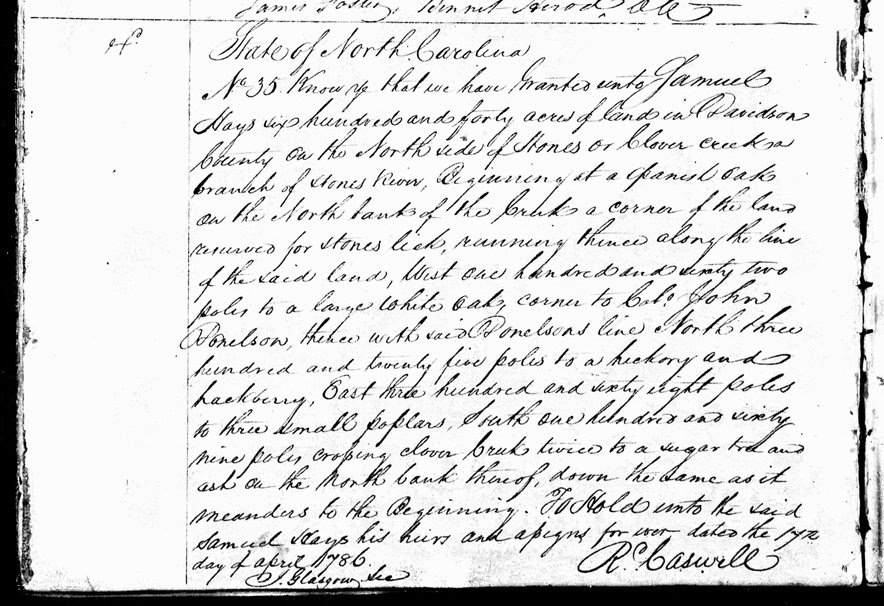 North Carolina Revolutionary War Land Grants
Roll 10: Book G-7
Page 15
State of North Carolina
Grant No. 35
Know ye that we have Granted unto Samuel Hays six hundred and forty acres of land in Davidson County on the North side of Stones or Clover creek a branch of Stones River, Beginning at the spanish oak on the North bank of the Creek a corner of the land reserved for Stones lick, running thence along the line of the said land, West one hundred and twenty two poles to a large white oak, corner to Col. John Donelson, thence with said Donelson line North three hundred and twenty five poles to a hickory and hackberry, East three hundred and sixty eight poles to three small poplars, South one hundred and sixty nine poles crossing Clover Creek twice to a sugar tree and ash on the north bank thereof, down the same as it meanders to the Beginning. To Hold unto the said Samuel Hays his heirs and assigns forever dated the 17th day of April 1786.
R. Caswell
J. Glasgow, Sec.

Posted by NickMGombash at Monday, January 20, 2014 No comments: