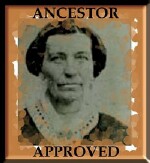 I received the Ancestor Approved Award from my friend Nuccia the other day. I've neglected to write about it until now. You can find her blog here. Thank you for the award, Nuccia!

As a recipient of this award, I am to list 10 things I have learned about my ancestors that have surprised, humbled or thrilled me and then pass the award on to 10 other genealogy bloggers I feel are doing their ancestors proud. So here goes...

Humbled
1. My 5th-great-grandfather, Hiram Howell, was murdered in 1853.
2. Agnes Gotowa, my 3rd-great-grandmother, jumped out of a third story window in Chicago in 1917, only 5 months after her husband passed away. She died two weeks later due to injuries from her fall. The secondary contributing cause of death on the certificate stated "temporarily insane".
3. My grandmother died at 45 years old from a heart attack. My life could be more than half over already.

Surprised
4. I was surprised to learn of my talent of Hungarian research. It came naturally to me.
5. I descend from the Swayze family, which makes me kin to Patrick Swayze!
6. In 1990, I learned I was going to have a little sister. I didn't know until years later when I was older, that my sister was actually a twin.. my mother had miscarried the other one. Looking into my family tree directly down my maternal line, my 4th great-grandmother was the daughter of a twin. Perhaps it was genetics?
7. I descend from two men who served during the Civil War. One of them was Johann Peter Stuempges, serving for the Union from Wisconsin. The other was James Andrew Costilow, serving for the Confederates from Mississippi.

Thrilled
8. How many cousins I have!
9. I'm a direct descendant of King Béla IV of Hungary. I descend through his daughter Szabina, who was the wife of Mózes, Palatine of Hungary.
10. My 3rd-great-grandfather, Johann Georg Summ, was born in the house that would later become the focus of the Schwarzwalder Freilichtmuseum ("Open Air Museum") in Gutach, Baden, Germany. The house is called Vogtsbauernhof and is the only house in the museum to be in it's original location. The other houses featured in the museum were brought in from various parts of Germany.

Now to pick 10 blogs I feel are worthy of this award - not an easy choice since I think they're all great but since I have to choose then these would be my choices.

Have fun with your awards!
Posted by NickMGombash at Wednesday, March 02, 2011 4 comments: