I had originally found this record several years ago, via microfilm through the LDS at my local FHC. It's located on microfilm number #0895813. Reading over the document, there may be a clue to another possible minutes entry, nine months after this one. Here is an image and extract of what is now available, freely online: 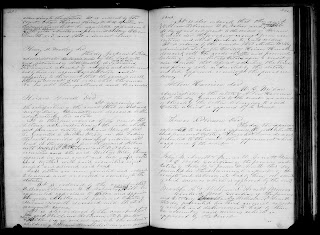 Tippah County
Be it remembered at a cession of the Probate court begun and held in said county on the third Monday and 16th day of January 1854 present and presiding the Hon. James Rogan judge of said court and the following proceedings were held to wit:

Posted by NickMGombash at Sunday, September 30, 2012 No comments: