Food & Genealogy: What Did Your Ancestors Eat?


On my way home from the grocery store today, I began to wonder what foods some of my ancestors would have eaten. In our present day and age, we have such an enormous  amount of options to pick from at our grocery stores, some that we didn't have even just a few years ago (like the interesting Ugli fruit that I discovered last year, a native citrus from Jamaica). I started thinking of each ethnic culture of my diverse mutt-like ancestry, and what some of their well-known dishes were of their cuisine. And then I began to think.. which of these dishes existed prior to the discovery of the Americas? 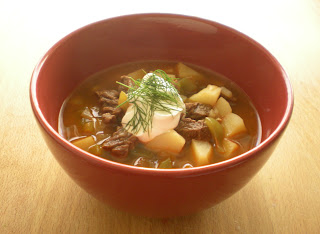 Naturally, I'm going to begin with Hungary. How could I not? :) Whether you're Hungarian or not, you must know of their national dish known all around the world: goulash (gulyás in Hungarian); you can find my recipe here. Two of the main ingredients in gulyás, paprika and potatoes, didn't reach Hungary until well after the discovery of the Americas. Paprika, or peppers, were originally cultivated and found in tropical areas of the Americas, whereas the potato is known to have its origins in Peru.

Italy:
It's extremely hard to think of Italy and not think of pasta with homemade tomato sauce, or pizza with that bright red tomato sauce, fresh mozzarella cheese and fresh basil. But neither existed prior to the discovery of the Americas; tomatoes are originally from the Andes mountain region. And then there's also polenta. That smooth, rich and creamy corn-meal dish made famous in Italy. Prior to the Old-World's discovery of corn/maize, they used various grains to make polenta; it sometimes included different kinds of flour, millet and spelt.

Poland:
Our dear, dear pierogies. I don't know anyone that doesn't like a good potato and onion pierogi; it's making me drool just thinking about it! As I mentioned above, the potato originated from Peru and was first cultivated by the Incas. So we must thank the ancient Incas for being the first to cultivate and hybridize the ancestors of our common potato. Did you know there's almost 4,000 varieties of potatoes?  Yum!

Ireland:
And the Irish! A genealogist hears potato, and they think of the Great Famine in Ireland, which spanned from 1845-1852. Many of you reading this article may be descendants of Famine emigrants; I know my uncle is!

If it weren't for the Incas, my uncle never would have been born.. and my grandmother may have never met my grandfather. Interesting to think about, huh?