FamilySearch Find Of The Day: Hiram Howell & His 1847 Taxes

I stumbled upon this 1847 taxation document from Tippah County, Mississippi the other day, and it shed a tiny bit more light (although not much) on the life of Hiram Howell. He is at the top of the document with two of his sons: Reece & David. 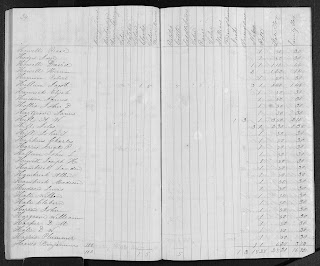 Hiram is listed as having 2 slaves, which matches what is listed in the 1850 Federal Census Slave Schedules. In 1850, it was a 21 year old female and a 4 year old male (probably her son?). I assume they are the same individuals listed in this 1847 taxation document. The woman would have been about 17 years old and the male child about 1 year old. This also makes me wonder how a girl of 15 or 16 became pregnant, as she is the only slave in the household. Was Hiram or one of his sons the father of the child? It could be another contributing factor that lead to Hiram's murder in 1853, but we may never know. Reece and David are listed as not owning any slaves.