FamilySearch Find of the Day: My Long-Lost Aunt


A few weeks ago, I was doing some indexing and arbitrating for the Hungarian civil registration records on FamilySearch Indexing. To my surprise, it was my great-grandfather's town of Büdszentmihály, in Szabolcs county! Within the first few batches, I came upon a birth record for a Gombás child. I immediately saw the father's name was Gombás Sándor (the name of my 2nd-great-grandfather), but kind of pushed it off the burner thinking I had all the children for my 2nd-great-grandparents. But then I saw the house number Sándor was living in; it was the house number MY Sándor had grew up and lived in! I went down and looked at the mother's name, and there she was.. my 2nd-great-grandmother, Tóth Eszter. I was blown away that I had found a sibling to my great-grandfather that I hadn't known about. I stopped indexing and analyzed the whole record, extracted the information and went and saved the actual image off FamilySearch. To my delight, the record gave mention of the child's date of death and the record number! The two records below are the child's birth record and death record, respectively. 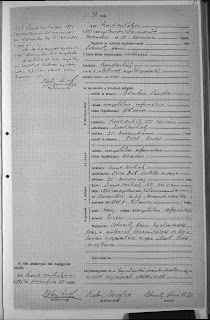 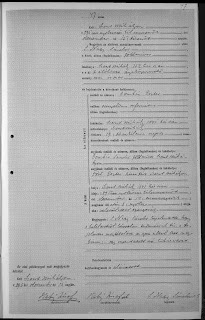