St. Stephen's Day & My Connection To The King 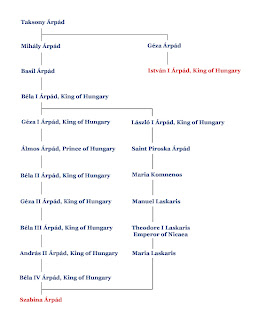 In honor of St. Stephen's day in Hungary, I thought it'd be neat to highlight my own connection to the well-known Saint and first King of Hungary. My own 24th-great-grandmother was Szabina, Princess of Hungary. She belonged to the Árpád dynasty and was the daughter of King Béla IV and his wife Maria Laskaris.